Wimbledon Grounds, a development of 600 new homes in Merton, from Galliard Homes and Catalyst, sets the new high standard for sustainability against which all property developments in our cities should be judged. Not only is every roof at Wimbledon Grounds environmentally-friendly green roofs, but they are also all ‘blue’ (storm-management) roofs that help reduce the flooding and pollution that blights our cities every time a storm hits.

Why blue roofs are essential

The Victorian sewers in UK cities are not able to cope with the unchecked run-off from roofs and hard landscaping. This means sewers are regularly overwhelmed, causing flooding and sewerage to overflow into rivers and wetlands. In the UK, privatised water companies are responsible for as many as 200,000 sewage spills per year, according to The Guardian.

This means it is essential that new developments adopt sustainable drainage systems (SuDS), such as blue roofs, to reduce their impact on city drains.

With its huge 14,000sqm of blue roofs and landscaped podiums, Wimbledon Grounds, is one of the largest blue roofing projects ever seen in London. The blue roofs will help reduce flooding in the capital by holding back all rain water that falls on the property in rooftop reservoirs and then gradually releasing it when the storm has passed. See the case study for more technical information on how the project works. 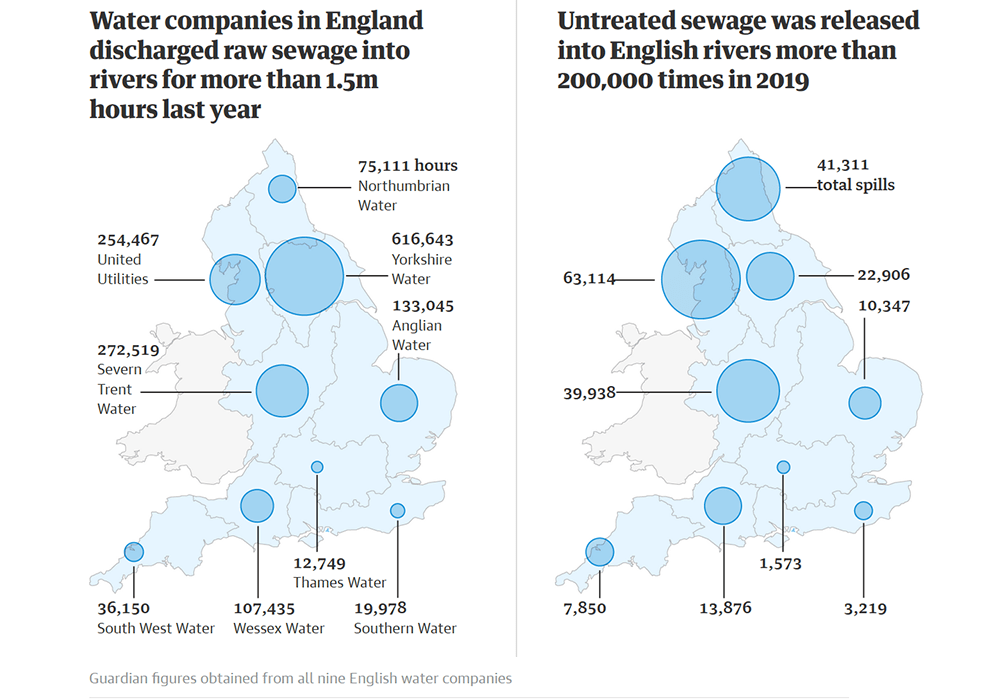 Located off Plough Lane in Merton, Wimbledon Grounds is a 51,000 square metre mixed-use regeneration project which provides a new purpose-built stadium for AFC Wimbledon – already in use – leisure and retail facilities and 600 new homes offered for private sale by Galliard Homes, a leading London residential developer, and shared ownership housing, provided by Catalyst, one of London’s largest housing associations. Residents are already moving in to the first tranche of homes, the rest will be ready for occupation later in 2021

With its pervasive blue, green and solar roofs, Wimbledon Grounds uniquely demonstrates to all stakeholders the critical role that house builders can play when it comes to both reducing the environmental impact of their projects and building in a sustainable way that helps to mitigate the effects of climate change.

“With the stunning Wimbledon Grounds development, with its pervasive blue-green roofs, Galliard Homes has thrown down the gauntlet to the UK’s other leading property developers. As a country we need to move rapidly to the time when every development built competes to be the most sustainable yet, because that is the only way we can hope to reduce the UK’s contribution to climate change and deal with its impacts,” says James Beattie, Operations Director at Pritchard & Pritchard, the installer of all of the blue roof and podium infrastructure and green (wild flower) roofs at Wimbledon Grounds. 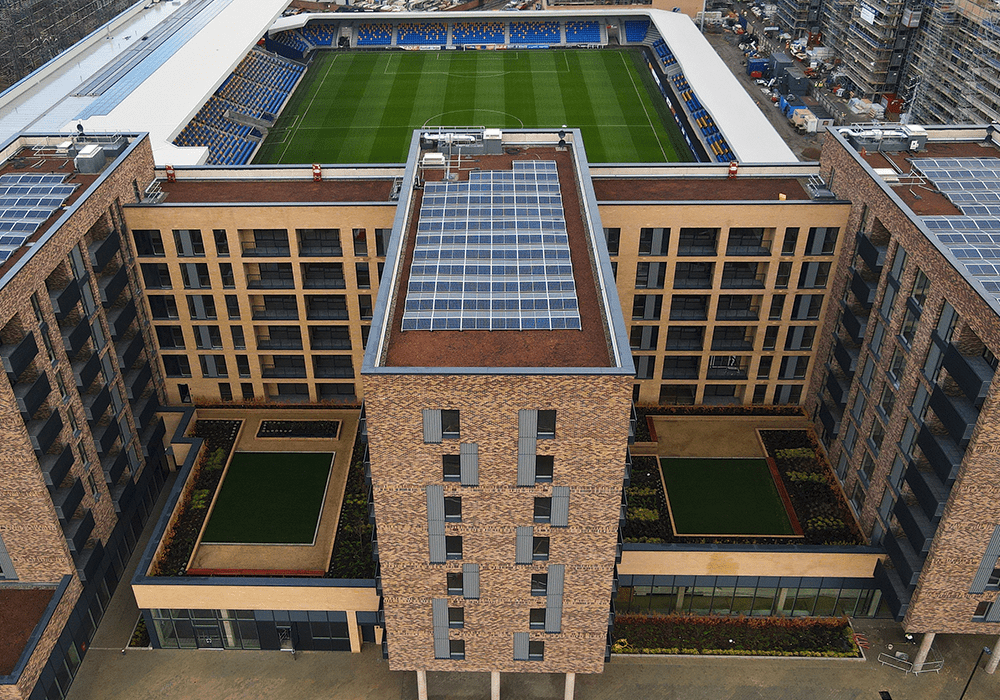 Since 2015 Government guidance has stated that local planning decisions for developments of 10 or more dwellings must ensure that sustainable drainage systems (SuDS) for the management of run-off are put in place. This has led to local planners expecting high standards of sustainability for developments in their boroughs. In Merton, the London borough where Wimbledon Grounds is located, the SuDS guidance says that developments should release water no more quickly than if the site was a green field.

“Merton actively encourages high levels of sustainability within schemes to help address the impacts of climate change. We have seen a significant uptake on the implementation of blue roofs on a number of high profile schemes across the borough, particularly in and around Wimbledon Town Centre,” explains Tom Sly, Flood Risk Management Engineer, Merton BC.

“The Galliard/AFC Wimbledon scheme at Plough Lane is not just the largest in Merton, but is also one of the largest blue roofs I am aware of in London. There were existing surface water flooding issues in this location long before the redevelopment and the blue roofs, in combination with other attenuation methods, provide significant betterment in terms of being able to reduce runoff leaving the site down to greenfield rates,” continues Sly who is also a member of CIRIA’s working group for the development of new Blue Roof Guidance for the industry. 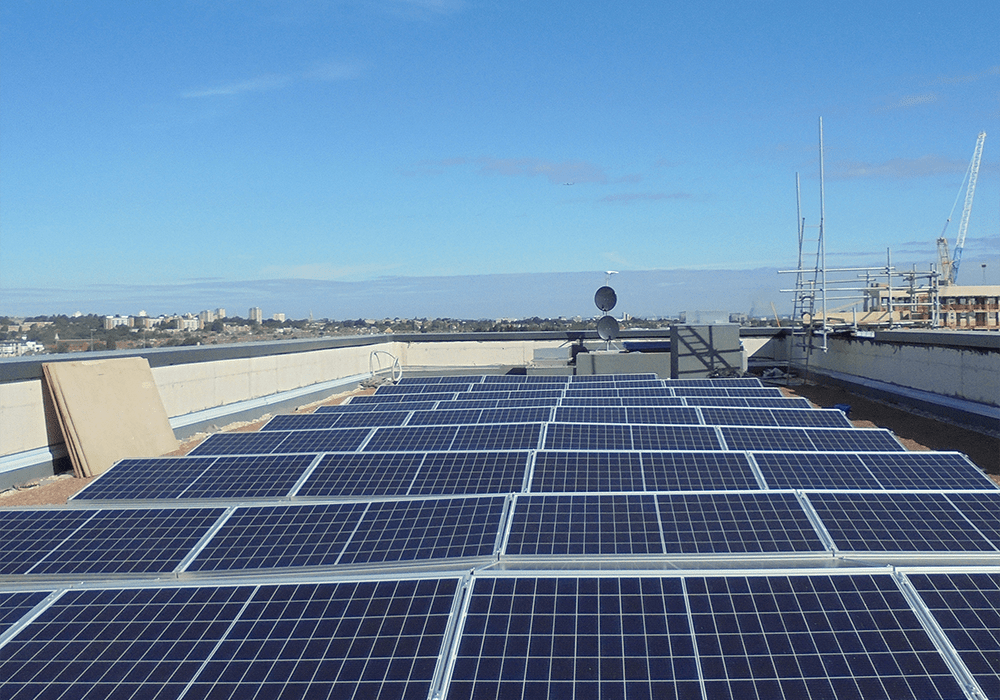 How blue roofs work to prevent flooding and pollution

All of the four landscaped podiums and 26 roofs in the Wimbledon Grounds residential development are all skinny reservoirs capable of storing all the water that would fall on the property in the largest storm. All of these blue storm-management roofs and podiums (and green roofs) were are installed by Pritchard & Pritchard, working with waterproofing expert Kingsley Roofing (London) Ltd, using blue roof and green roof technology supplied by ZinCo Green Roof Systems.

The diagram – curtesy of ZinCo – shows how a blue roof is built up. Each roof has an invisible hollow space – a bit like a honeycomb between the roof structure and waterproofing and the layer where the plants grow – in this case, wild flowers.  After a heavy storm the water is gradually released over 12-24 hours by flow controllers, so the city drainage systems will not be overwhelmed.

There are alternative sustainable drainage strategies (SuDS) such as digging subterranean attenuation tanks or ponds for storm water control. However urban developments these alternatives may not as feasible or economical as retaining storm water at roof level, because space cities is at a premium, excavation can be costly, and may not be permitted by planners. 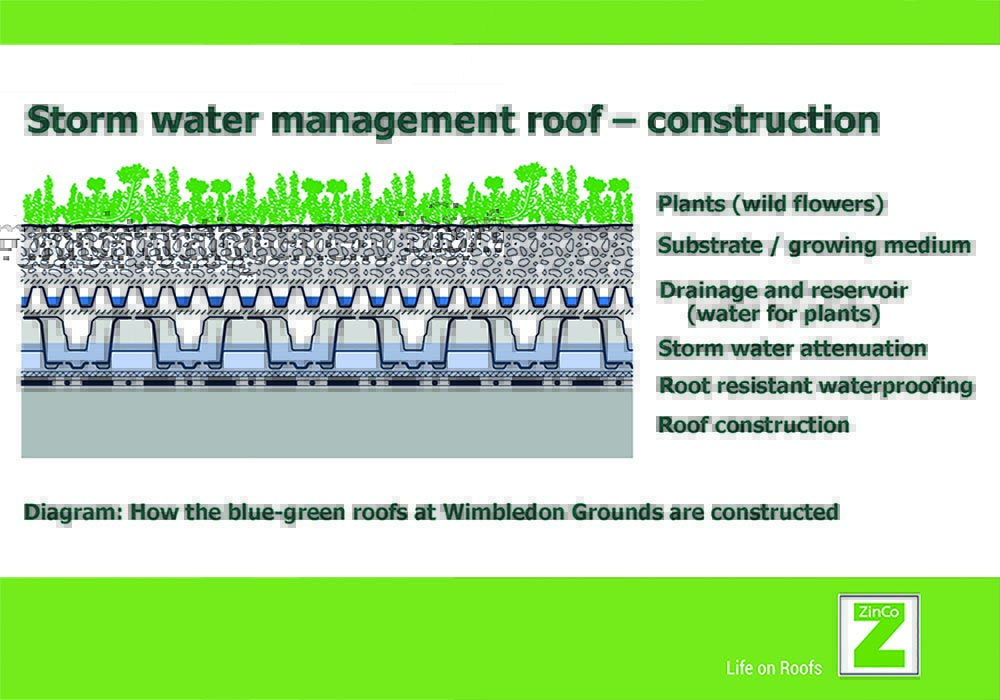 Setting the standard for living roofs in the capital

So how does Wimbledon Grounds compare with other sustainable roofing projects in London?

“Not only has this development provided such a range of different green roofs, the area is significant. This development has increased the total area of green roofs in London Borough of Wandsworth by 15%,” says Dusty Gedge, President European Federation of Green Roofs and Wall associations.

“This is one of many developments across London that help make the UK capital more climate resilience, and I suspect that this is one of the largest areas of blue-green roofs in the capital. What is good to see that this development has combined approaches – blue-roofs with solar, whilst also including native wildflowers.”

“This is where all green roofs ought to be going in the capital wherever possible,” concludes Gedge. 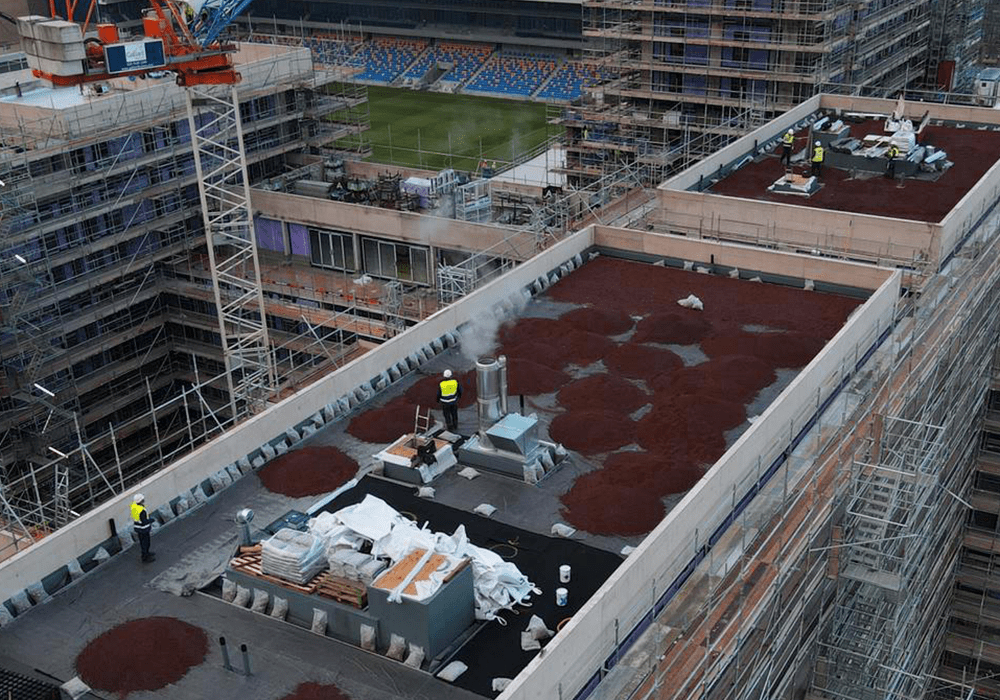